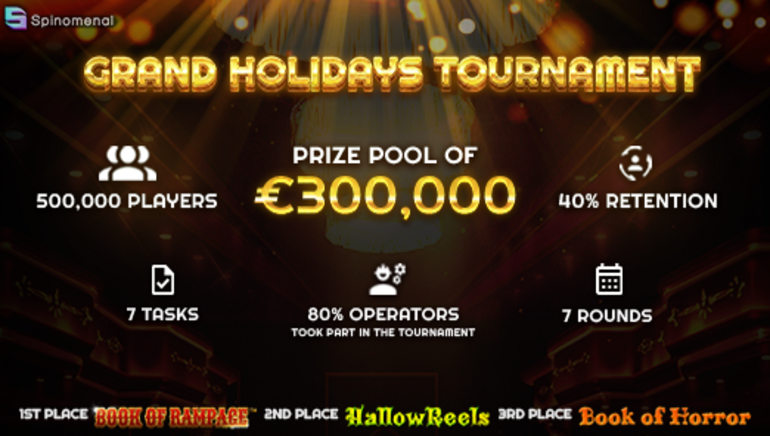 A popular game developer Spinomenal has announced the final results of their Grand Holidays Tournament, which saw more than 500,000 players compete across different online casinos for the total prize pool of €300,000. The tournament lasted for three full months and consisted of seven separate legs, each featuring its own prize pool.

Impressive Action Around the Clock

Now that the numbers are in, Spinomenal revealed that all players who competed in the tournament amassed more than 30,000,000 points over the course of three months. This shows the players' dedication and just how much this event was popular across the board.

Half a million players got involved with Grand Holidays Tournament, and the final, seventh leg, was the one that generated the most interest offering a massive prize pool of €100,000. There were many prizes won during the tournament, but the single-highest score was €26,700. This was closely followed by two more wins of €24,105 and €20,400.

Players Sticking Around Till the End

For an event lasting this long, the provider has published some impressive retention figures. Namely, 40% of players who competed in one of the first six rounds went on to Round VII to complete the final challenge and fight for their share of €100,000.

With Spinomenal being a slots developer first and foremost, the tournament revolved around players playing select games to accumulate points. Looking back, the most popular slot was Book of Rampage (in Round V), followed by Hallow Reels (Round III), and Book of Horror (Round II).

Overall, the event was a big success as it garnered a great deal of interest among the players, increasing the popularity of Spinomenal titles, and many players got to reap the rewards for their commitment. Thus, it achieved everything the company could have hoped for.

This feeling was echoed by Lior Shvartz, the CEO of Spinomenal, who said that the Grand Holidays Tournament was an event that players really engage with as it gives them an opportunity to score big, potentially life-changing prizes. He also took the opportunity to express his gratitude to all the partners who helped make the event such a big success.