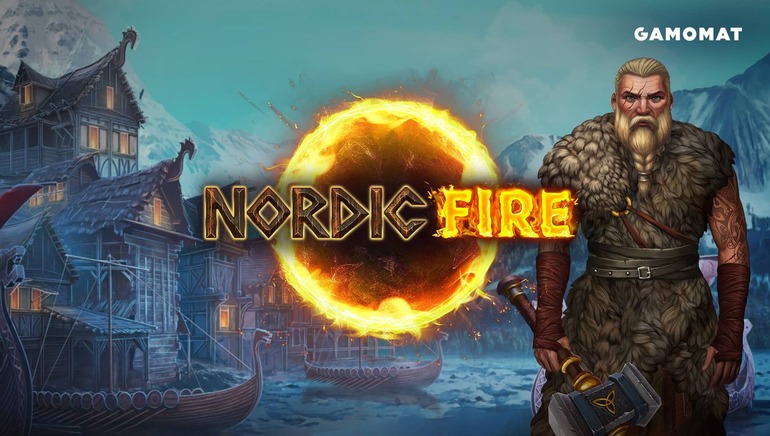 Nordic Fire is the fifth and final title in the operator's Fire Series, rounding things up with an exciting Viking-themed adventure on the reels.

As the year is quickly coming to an end, game providers are looking to wrap things in style and push out the final releases. GAMOMAT, a popular gaming studio based out of Germany, is in this group as the company has just released the fifth and final title in its Fire Series, named Nordic Fire.

As one could probably guess from the name, the latest slot takes players back in time and places them inside a peaceful Viking settlement being threatened by a vicious army of fire giants looking to disturb that peace. Left with no other options, people have to go back to their warrior ways to defend against the threat from Surt and his mighty giant army.

Superb Graphics for an Epic Adventure

Like the rest of the games in the Fire Series, the Nordic Fire slot comes with polished graphics and exciting cut scenes to keep the players engaged and entertained. The gameplay is accompanied by a powerful soundtrack, further adding to the atmosphere.

Big win animations are also there to celebrate lucky big hits along the way, and the game features four distinct jackpots that are up for grabs during the bonus feature.

The Surt scatter symbol is the most important one in the game. Landing three or more of these on the reels triggers the bonus round that starts with five spins. However, every additional scatter landing during the bonus adds an extra spin.

In the free spins, landing four or fewer fire orbs with money values will add those values straight to the win. Five or more orbs on the reels in a single spin trigger Fire Respins. The Fire Respins round starts with three spins and is reset with every new orb landing on the reels, and the final win is calculated at the end of the round, adding all values together.

Players can also win any of the four jackpots during the bonus. Mini, Minor, and Major can be landed on the reels, while the Inferno Jackpot is awarded for filling up the grid with Fire Orbs (landing all 15 of them).

GAMOMAT's entire Fire Series has been a big hit with the players, and there is no doubt that Nordic Fire will help boost that popularity further, giving players yet another fiery title to enjoy and potentially land some big prizes along the way.