All Slots Casino Gets New Pokies for June 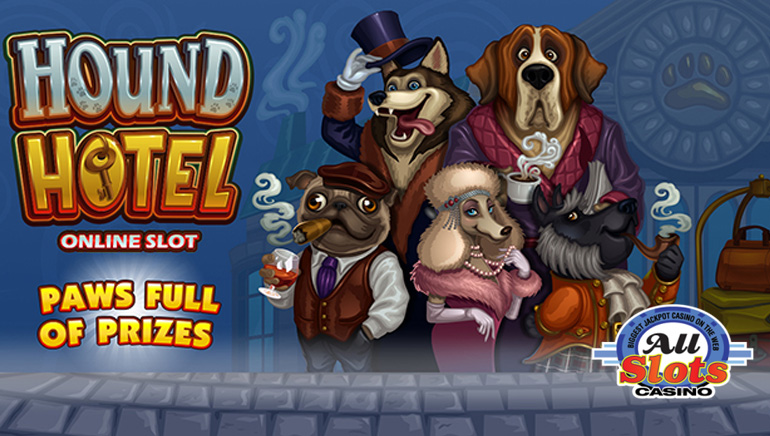 Hound Hotel and Kitty Cabana will headline several new pokies set to launch on All Slots Casino this June.

All Slots Casino is living up to its name by adding multiple new Microgaming slots to its gaming library in June. Players will soon have desktop access to new pokies like Hound Hotel, Kitty Cabana, Pistoleras, and Legend of Olympus, while Cashville, Fish Party, Kings of Cash, and Summer Holiday will all be available on mobile.

Hound Hotel is a charming pokie designed with retro-styled cartoon visuals depicting various breeds of dog. Built with five reels and 25 paylines, the pokie is also complemented by a rewarding special feature. The bonus round is multi-tiered in that you can pick doors over three levels to win prizes like multipliers and free spins.

Kitty Cabana balances out the animal action by providing another adorable pokie. Microgaming has also built this pokie with five reels and 25 paylines, while the retro cartoon style is also familiar. Landing three scatter symbols will trigger a bonus round in which a 6x multiplier and up to 24 free spins can be unlocked.

This is a Wild West-themed game played out in a Mexican setting. Pistoleras continues Microgaming’s trend of retro-styling, as opposed to glossier releases like the Dark Knight Rises and Battlestar Galactica. Trigger the Saloon Bonus with three scatter symbols on reels three, four, or five to enter a shootout. Free spins and multipliers can also be triggered.

The Legend of Olympus

Microgaming will also distribute this Rabcat pokie to All Slots in June. Played out over five reels and 20 paylines, you will travel to Mount Olympus to aid Zeus in his conflict with Hades, god of the underworld. Special features will let you play in a two-stage bonus round or unlock up to 14 free spins. Oh, and don’t forget that Cashville, Fish Party, Kings of Cash, and Summer Holiday will be launching on mobile devices in June.